When I was 28-years-old, I filed for bankruptcy.

I was a divorced mom with two kids. Working as a writer, I had $30,000 in debt. I felt ashamed and hopeless. But I thought bankruptcy would begin a new chapter in my story.

Little did I know, the bankruptcy was just beginning of the work I would have to do.

How Did I Get Into This Mess?

My parents never taught me anything about money.

We always had enough to pay the bills and sometimes there was enough for a family vacation. But when my parents divorced things got a lot tighter and I remember my mother worrying about money a lot.

My family didn’t talk about budgeting, how to pay bills or the dangers of debt. My mom would get stressed when I needed money for something unexpected. Yet she often said, “the money always comes” and that was true, in a sense.

The money always came, but it was always just enough to get by. No more.

I carried that lack of knowledge and sense of ‘barely enough’ through my own marriage, the birth of two children, and into my divorce. I’ve never been in a place in my life where money wasn’t a source of stress and fear.

Scarcity is not a fun way to live, that’s for sure. 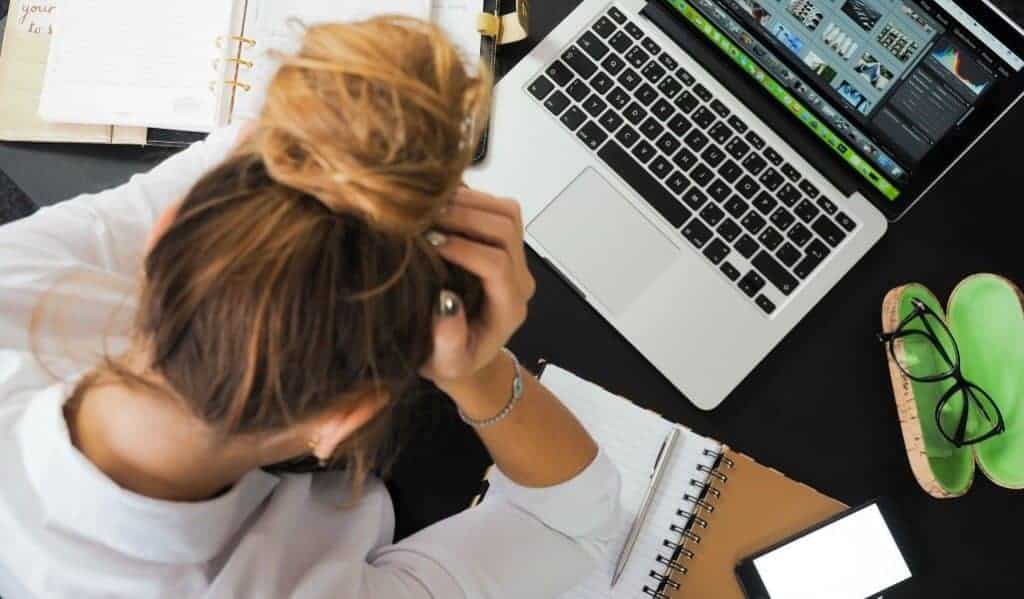 Making the Decision to File

I had been paying the minimums on everything and paying on time. But due to some impending changes to credit card laws, all my interest rates and minimum payments went up.

I couldn’t pay anyone anymore.

All of my debts were sent to collections. They started calling my friends and family. A friend gave me the money for a consultation with a bankruptcy attorney and he told me that it was my best option. So, I began the long and painful process to wipe out the majority of my debts.

Luckily, I was able to keep my car and continue the payments. And, of course, I had to keep my student loans. Even bankruptcy can’t kill those!

I remember sitting in the courtroom watching others have their moment before the judge. Feeling sick to my stomach, I told myself that I’d never be in that position again. I was getting a clean slate and I wouldn’t make the same mistakes.

But we all know that you should never say never.

When you file for bankruptcy you have to take online counseling before and after filing. They were short courses that explained the process of bankruptcy, and what you could do to keep from getting in that position again.

The problem was, I didn’t have a solid plan on how to change my habits. I thought filing for bankruptcy would trigger a huge shift in my financial life. But I still had the same job, the same bills, and too much month at the end of the money. It all felt the same, just with a little less debt.

And the temptation to lean on debt was still there.

When you file for bankruptcy you think that no bank will want to touch you. No one will offer you a car loan or a credit card ever again.

But after my bankruptcy was over, I learned that nothing can be further from the truth. I was getting letters from car dealerships all over the country and credit card offers in the mail daily. Only now the interest rates were double.

I’d love to tell you that I fought the good fight and I’m debt free, but that’s not the case. I fell back into old habits and ended up in debt again. 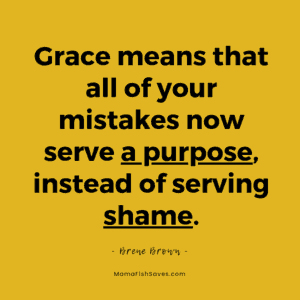 Living with the Guilt and Finding a New Path

The guilt of filing for bankruptcy can be overwhelming. You have to provide a lot of information about what you own and who you owe. It can make you feel awful about how you’ve spent your money. And then the shame of falling back into debt again is crippling at times.

That can be especially dangerous for someone who will self-medicate by spending money.

But once you’ve filed your options get very limited. You can’t file for bankruptcy again and it becomes difficult to get things like personal loans to consolidate debt. It can even prevent you from getting a better job. So, I realized that this time there would be no help. I would have to figure out a way out of this mess on my own.

First, I knew that I would need a budget.

I love technology so I tried a few free budgeting tools and I made some spreadsheets. None of those things clicked. I wasn’t making any headway.

Then by some miracle, I heard about the program You Need a Budget (YNAB).

The Miracle of You Need A Budget (YNAB)

I had some false starts with YNAB. When I first used it, it was a desktop-based software program. I’m on different computers all the time and having it on only one prevented me from making YNAB a habit.

Then, when YNAB moved to a web-based platform and the tool became accessible anywhere, it began to change my life.

YNAB is not like any other budgeting program. Instead of trying to plan my whole month, it taught me to work with what I have right now. It allowed me to roll with the punches when something came up that would normally throw my whole plan out the window.

It gave me a fresh perspective on money.

For the first time, I was actually starting to have the money for bills when they were due.

Things like my personal property tax on my car were no longer a source of panic. I was able to set small, achievable goals and hit them. I started cutting out unnecessary spending and shopping sales.

For the first time in my life, I felt like I had a little bit of control. I began to feel like I was in charge of my money instead of it being in charge of me. I slept a little easier at night knowing that I had the money for bills that normally I’d be scrambling to pay.

Taking it to The Next Level With Undebt.it and a Side Hustle

But it was still evident that there wasn’t enough money to meet all my obligations. I knew I had to bring in more money.

I wasn’t ready to change jobs so I started looking for side hustles.

I’m a writer by day so I began to pick up a little freelance work here and there to supplement my income. This helped me begin to be able to stop relying on credit cards for the unexpected and start saving for those yearly bills that you know are coming but never seem to have the money for when they arrive.

As I started to make progress with my debt, I learned about Undebt.it in a YNAB Facebook group. I used it to create a debt payoff plan and keep track of my progress toward that goal.

I was finally building better habits.

I’d love to tell you that is true, but it’s not.

Debt is still a part of my life and I haven’t completely ditched my money stress. But it’s a lot better now. I can sleep at night without waking up in a panic about how I’m going to cover everything that needs to be paid. And I’m able to think outside of the box to earn more money.

One of the biggest things I’ve had to learn post-bankruptcy is how to forgive myself. I have a lot of guilt and a lot of fear around money. And I’m learning to come to terms with that and work through it. 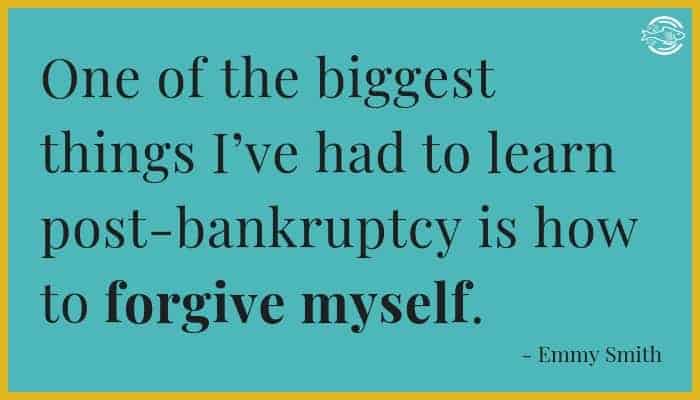 Beating yourself up over the mistakes you have made doesn’t get you anywhere.

I’m owning them and making plans to fix them. It’s going to be a long process, but there is hope now.

I have the tools I need to help me reach my goals. There is an amazing community surrounding YNAB, and they help me work through things when I’m struggling. And I’m making progress.

I now know that I can become debt free on my own.

I have set a goal to eliminate my consumer debt within the next two years and increase my income. After that, I plan to begin to work on paying off my student loans.

Bankruptcy is a personal decision. I can’t say whether I’d do it again if I had the moment to live over.

What I do know is that I wish that I’d known more about what happens after bankruptcy before I filed. I wish I had known about resources like YNAB. And I wish I’d found a supportive community of people who were working to be smart with their money.

If you’re struggling with money or considering bankruptcy, know you aren’t alone. Forgive yourself your past mistakes. Then, take the time to address the habits and motivations that got you there in the first place. Make time to improve your money mindset.

Then, make a plan and stick to it. Things can get better.

They have for me. 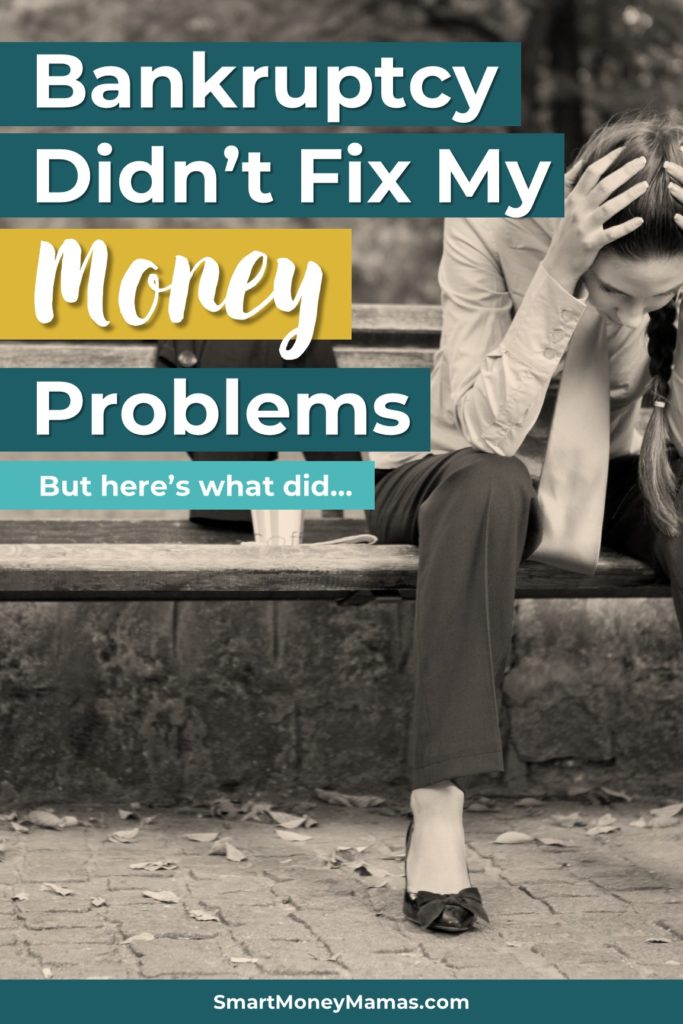