We are back with another installment of the Aha! Moment debt series! This month we meet Ashley, a wife, mom, and blogger that has paid off $45,000 in debt. Through a job loss, unexpected tax bill, and a husband who doesn’t like to talk about money, but still got on the debt-free train.

To read more stories in the Aha! Debt Interview Series check out the project’s page here! 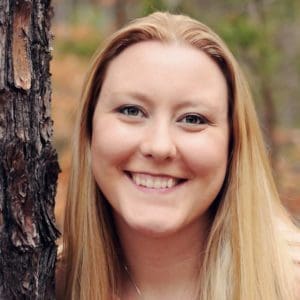 Hi, I am Ashley and I blog at Budgets Made Easy. I am a wife and mom to 3 little kiddos. I decided to start a blog after helping so many of friends with their finances and budgets. Once they saw all the success that I was having, they had to know how to do it too.

I was a police officer for 10 years and a detective for 7 of those years. I was miserable in my job but I couldn’t afford to quit either. We wanted to have more freedom in our lives and debt was holding us back.

Once our debt was paid off and we had our third child, I was able to quit my job! Now I stay/work at home and get to enjoy my kids more.

We started by using the debt snowball method and paying on the lowest debt first.

My “aha” moment was when we had to put our tax bill on a credit card. It was zero percent interest for 18 months and once I did it, I didn’t think about it again until the first bill was due. I got the bill and realized that I didn’t have a plan for paying it off in 18 months.

I started searching for debt pay off plans and came across Dave Ramsey. I ordered his book The Total Money Makeover and got to work. I realized that I didn’t want to have any debt, not just get rid of the credit card.

I never really liked debt and always paid stuff off early but I never realized that I could be completely debt free. It was just normal and I didn’t think much about it. I thought we were doing well with saving money and paying things off early. 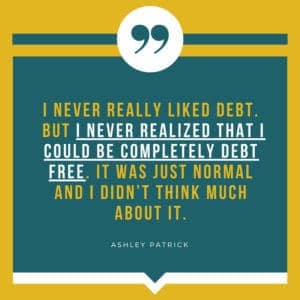 Even before this, I made cash down payments on things and didn’t use debt for everything like furniture and things like that. But I did use credit cards for reward points or loans with zero percent interest because “why not”.

My debt-free journey really began when my husband lost his job. It was very unexpected and was devastating emotionally. We had just had our second child and completed a remodel on our home.

We had plenty of money saved and he had a severance package, so it was stressful but we managed. He was able to get another job relatively quickly and it worked out because he got double paid for awhile.

The shock came when we were told we had 90 days to pay back a 401K loan we had taken out to remodel our house. Well the money was gone and we certainly didn’t have that much cash. To add insult to injury, my husband was out of work, so taking out another loan to pay it was out of the question.

This led to the issue with the tax bill. The next year, we received a nice little note telling us that the amount we took out for the 401K loan was now taxable income. It also bumped us up a tax bracket.

So really, it started with the job loss then snowballed into the tax bill and credit card. It took all that to make us realize that debt wasn’t for us!

We had to say no to going out a lot. We quit eating out a lot and meal planned. I didn’t realize how much we were spending on food until we started paying off debt. I was able to cut it in half and save money by making meals at home.

We also cut back on luxuries like paid radio, magazine subscriptions, name brand products, and a gym membership. We decided that it was worth giving up those things now for our long-term goals.

I did not because it wouldn’t work with my full-time job. Not to mention the hassle I would have had to deal with because of my job.

My husband did work a ton of overtime even though it was not time and half, it was only HALF his hourly wage. Don’t ask me how it’s legal but every company in his industry does it that way.

He also did a lot of side work at home for extra money. He is a mechanic and fabricator and works on project cars for people.

We sold a lot of things to pay off debt faster as well. We sold some big items and a lot of small items. I even sold all my living room decor, including my lamps!

Hmmm , I don’t remember any major setbacks. There were times that we were sick of sacrificing. One time my husband asked me if we could by shaving cream again when we were debt-free. Ha!

It was hard to give up going out to lunch so after a couple of months, we put that back into the budget. It was more about social interaction and decompressing from the stress of our jobs. It was important to us, so we put it in the budget.

We still budgeted in fun stuff here and there. If you don’t, you will go crazy and will give up.

I did save money until we were almost debt-free before sending it to my student loan. We knew that our HVAC system was going to need to be replaced soon.

Once we made it through that summer, we sent the money that was left “just in case” to the student loan. Our HVAC system made it two more years and we had the money saved to pay cash and got a cash discount!

No, luckily my husband pretty much just goes with all my crazy ideas. It was hard because he just goes along with whatever I say. He was on board with paying it all off but it took him a long time to really get why.

I felt like I was handling it all by myself because he wouldn’t sit down for budget meetings and didn’t care to know what was going on.

I would play Dave Ramsey podcasts in the car when riding together so he was exposed to the reasoning behind it all. He was annoyed at first and then started to enjoy it. This helped a lot since he wouldn’t read the book and it was easier than me trying to explain it all to him.

He is grateful that we are debt-free and can pay cash for things but it is still hard for him to not spend money when “it’s a good deal”. It drives me insane.

We did the debt snowball.

Stay away from 401k loans and credit cards! Taking out a 401k loan is the worst idea ever. People say “you’re paying yourself back”. Yes, you kind of are but you are robbing yourself of future compound interest.

Then we will be back to saving for retirement, kids’ college funds, and paying off the mortgage early.

Thanks to Ashley for sharing her family’s story!

What did you think of Ashley’s story? Any thoughts you would add? 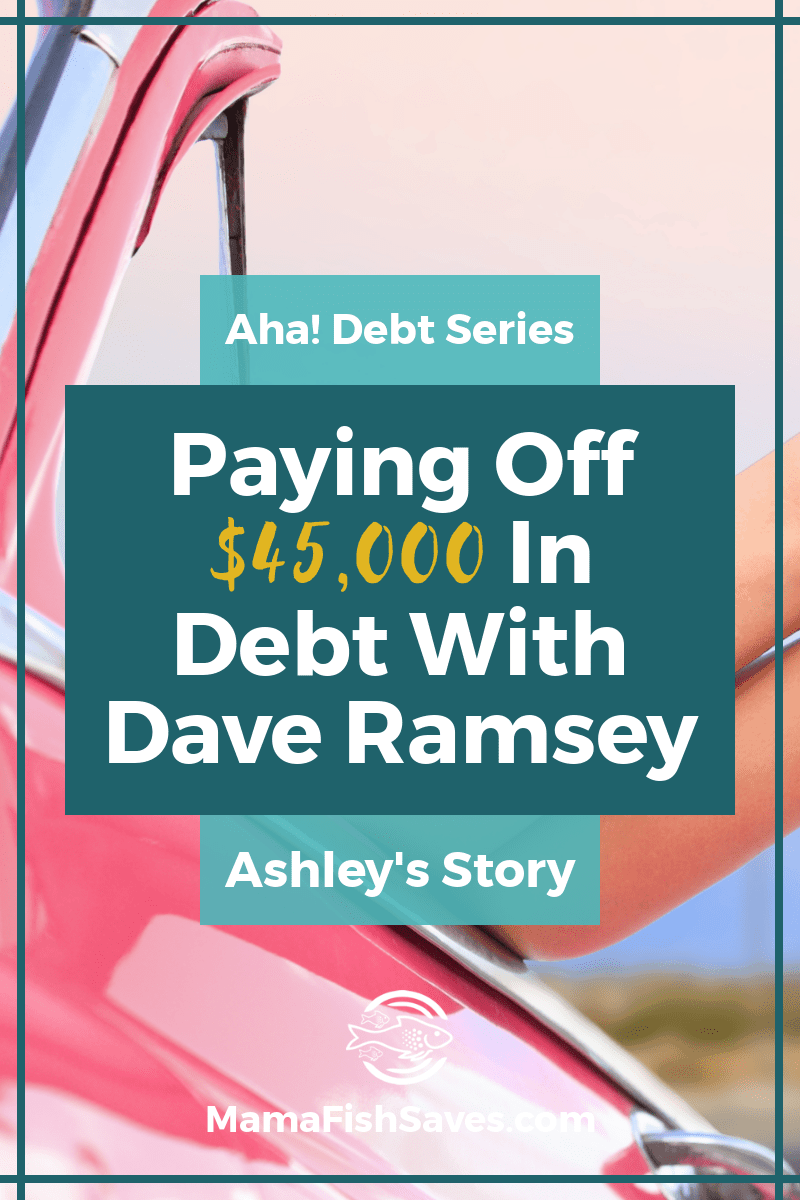 1 thought on “Aha Moment Debt Interview: How Ashley & Her Husband Tackled $45,000 in Debt”