A Roth IRA (Individual Retirement Account) may be the 2nd most popular product in the personal finance world.  (Low-cost index funds still have them beat!)  But are they really better than traditional IRAs?  How do you choose between a Roth and traditional IRA?

Both types of IRAs offer tax benefits to entice you to save for retirement.  Both types have a $5,500 annual max contribution limit.  In the Retirement Planning Calculator, you can see that income in retirement isn’t that different regardless of which IRA you use.  The difference lies in what you believe about the future.  This post covers some of the key beliefs that would lead you to choose a Roth IRA over a traditional IRA.

The personal finance community is filled with brilliant people.  As such, their puppy love for Roth IRAs is not entirely misplaced.  When choosing between a Roth or traditional IRA, remember a Roth gives you options.  A Roth IRA has some very interesting features that no other retirement accounts offer, which I will outline below.  These features could be beneficial depending on what you think the future holds.  Here are four top things you might believe about the future that could make a Roth IRA a better choice for you.

1 – You believe tax rates are increasing.

Roth IRAs are funded with post-tax dollars and grow tax-free for life.  Based on current tax codes, you will never pay income or capital gains tax on Roth IRA withdrawals.  Alternatively, traditional IRAs are funded with pre-tax dollars.  You get a tax deduction in the year you contribute to the account.  Then, all distributions in retirement have to be taxed as normal income.

The benefit of a Roth IRA’s tax-free growth is largely dependent on where you think U.S. income tax rates are trending.  There are many headlines and much political posturing around America’s high taxes.  However, we are actually on the lower end of rates for developed countries. Some people would argue that given budget deficits and U.S. citizen’s increased support for Federal programs, it isn’t out of the question that we see income tax rates climb in our lifetime.  Countries that offer services like higher education, healthcare and parental leave, such as the Netherlands, have tax brackets as high as +50% of income.  Comparatively, the U.S.’s highest bracket today at 39.6%.

If you think rates are going up, a Roth IRA may be right for you.  You will pay the tax today when you believe rates are lower.  Then, as tax rates rise, the benefit of tax-free growth and withdrawals also rises.

While I actually think income tax rates will increase, I wouldn’t be so sure that the changes will impact retirees.  Social Security is in trouble, and most Americans have under-saved for retirement.  I think it is reasonable to believe changes to the Social Security program could come with an offsetting relief on taxes for retirement account withdrawals.  This would help alleviate the notable strains retirees will be facing in the future.  Yes, I realize the utter insanity of putting “reasonable” in a sentence about policy, but they will have to do something.  Changing the tax code for retirement accounts seems like an easy out.  In this case, the gap may be closed somewhat between a Roth and traditional IRA by the time of your withdrawal.

2 – Your income (not assets) will be higher in retirement than they are today.

The key word here is retirement income, not retirement assets.  Unless something goes horribly wrong, your assets should be higher the day you retire than they are today.  You have so many years to save!  But you aren’t taxed on your assets; you’re taxed on your income.

You have to consider how much money you expect to be earning in retirement.  You could earn money through fund withdrawals and/or other income generating assets.  Check out the Retirement Planning Calculator to see where you can expect your income to be in retirement based on your savings rates.  If it is higher than it is today, you may want to check out a Roth IRA.  This is because you will move into a higher tax bracket later in life.  So you are better off paying the taxes at the lower rate today.

In general, Roth IRAs are excellent for teenagers with summer or part-time jobs as they don’t make enough to have much, if any, tax liability.  They also have time, the most valuable asset in the world.  Because their investments have 40-50 years to grow, the benefit of that tax-free compounding is immense.

Keep in mind that your income in retirement is largely based on your savings rates.  If you are making $15,000 a year today, and expect to get up to $150,000, your income should be higher in retirement than the $15,000 you make now.  But if you never save more than 5% of your income towards retirement, you may be pinching pennies in retirement.

If you are young or early in your career and expect to have a higher income level in retirement, a Roth IRA may be right for you.

3 – You will have other sources of income in retirement and may not need your IRA.

Traditional IRAs and 401(k)s allow you to take tax breaks to save for your retirement, so the government actually expects you to use the money in retirement.  As such, traditional IRAs and 401(k)s have Required Minimum Distributions (or RMDs) that begin after the age of 70 1/2.  This means that based on your age, life expectancy, and account values the IRS requires you to withdraw a certain amount every year.  You then pay taxes on the withdrawal as income.  You can reinvest the money in a nonretirement account, spend it, or donate it to charity but you can’t put it back in your IRA.

Alternatively, Roth IRAs have no RMDs.  You already paid the tax on your money before you put it in the fund, so the government cares less what you do with it.  If you don’t need it, you can let it ride!  Earn extra years of tax-free growth.  Have the extra value there if you need long-term care, have uncovered medical expenses, or simply want to leave a larger estate for your family.

The lack of RMDs make Roths a great choice for anyone who expects to have other sources of income in retirement that may not need their Roth distributions on a regular basis.  For the FIRE (Financial Independence, Retire Early) community, Roth IRAs make perfect sense as these individuals have built up sources of passive income from real estate properties, business investments, dividends and other sources to support themselves.  These assets will continue to generate income making a retirement account somewhat unneeded for normal expenses.  That said, the money in the Roth will be there when it is needed.

If you are thinking about acquiring income generating assets, a Roth IRA is likely the best choice for you.  But what if something goes wrong, and the opposite happens?  What if you need that money sooner?

4 – You may need the money in your IRA before retirement.

I debated even including this, so let me start with a public service announcement.  Your retirement account is not a cookie jar.  You should not withdraw from it before retirement unless it is a true emergency.  That said, if it turns out you need the money now, in most cases, it is easier and cheaper to withdraw funds from a Roth IRA than a traditional IRA.

For a Roth IRA, you will never pay taxes on withdrawals of the capital you put into the account, as long as it has been five years since your initial deposit.  If you need the money, you can pull out principal and leave the gains with no associated tax or fee.  But remember, you have until the tax deadline of the year you withdrew the funds to put the money back in full.  If you don’t return it by then, your $5500 annual cap will go back in effect, making it hard to catch up.

If you feel like you might need to tap your IRA for major emergency expenses, or simply like the security of the available cash, a Roth IRA might be the right choice for you.

Can’t you use traditional IRAs in emergencies too?

Yes.  Distributions from a traditional IRA or 401(k) taken before 59 1/2 may not be subject to the 10% early withdrawal tax if the distribution is for a certain type of expense.  First time home buyers (up to $10k), higher education expenses, certain un-reimbursed medical expenses, and medical insurance after 12 weeks of consecutive unemployment are usually exempt from the penalty.

So is the Roth a better choice? It is up to you.

For most people, a Roth IRA will offer a small (3%-6%) benefit to their income in retirement with similar long-term tax relief to a traditional IRA.  While the dollars and cents difference is minor, the flexibility of a Roth IRA has its own kind of value.  The flexibility of a Roth is enough to push most people into that camp.  By using a Roth, you give yourself options. That’s what makes it one of the most popular products in the personal finance world!

Do you use a Roth or traditional IRA?  How much are you saving for retirement?  Let us know! 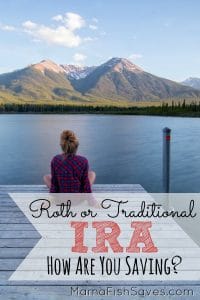 4 thoughts on “Deciding Between a Roth or Traditional IRA? Consider the future!”