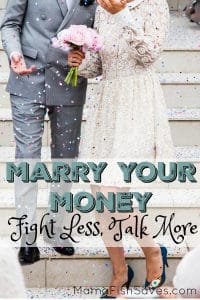 There is a heated debate in the personal finance community about whether couples should merge their finances when they get married.  I fall pretty strongly on one side of the line.  If you are married, your money should be too.  I believe fully merging your finances reduces money arguments and allows more time for talking productively about your money.

According to research, 42% of couples that have a joint bank account also have separate checking accounts.  14% of married couples having completely separate finances.  The rise of individual financial accounts, particularly for women, is driven by a desire to maintain independence, according to a TD Bank survey.  But what is this doing to relationships? 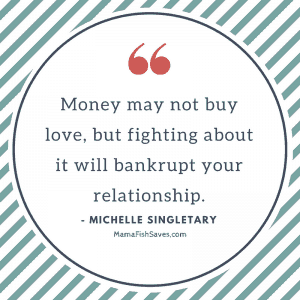 A study by the American Institute of Certified Public Accountants (AICPA) and the Ad Council found that 88% of millennial couples who are married or living with a partner reported that financial decisions are a source of tension in their relationship.  The survey also found that financial decisions caused tension in 20% of relationships on a daily basis and an additional 31% of couples felt the stress on a weekly basis.  Yikes.

Another study from the AICPA from 2014 found that money is the number one source of arguments in the home, with 27% of fights related to financial matters.  More than children, 16%, and household chores, 13%.

Even more shocking is the prevalence of couples who are hiding money issues from their spouse.  3 in 10 AICPA respondents admitted to have deceived their partner about money.  A study by CreditCards.com found that an estimated 12 million Americans have kept a source of money hidden from their partners!  I have a feeling they weren’t hiding that Wendy’s purchase in the middle of their Whole30…

The cost of not talking about our money

What are we fighting about?  Why can’t we be honest with our loved ones?  Well, less than half of adults married or living together set aside time to talk about financial issues on a regular basis.  Couples very often aren’t on the same page when it comes to needs versus wants, how to prepare for unexpected expenses, or how to save.  We aren’t communicating and our hidden feelings cause regular arguments.

Before diving into why I think merged finances do a better job of reducing arguments, let me start with the most important thing.  Regardless of what you choose to do with your finances, if you don’t talk about it you are going to fight about it.  No ifs, ands, or buts.  Money is a constant part of our lives and if you can’t talk to your spouse about it, it is going to cause issues.  Hopefully you discussed things before you got married, but if not, it is time to start now.

In my opinion, merging finances is the first step to bridging the gap.  We have to open the lines of communication and be open and honest with our spouses about money.  That is a lot easier to do if it is all sitting in one place.  But there are other reasons too.

There is no such thing as separate but equal

Didn’t we put this to rest with Brown v. Board of Education?  Sure, you tell yourself and your spouse that you will split all joint expenses equally or fairly and your separate accounts will be only for your own expenses.  It is your money, you want to maintain the independence to spend or save it how you want.  A good story, but it doesn’t actually work.

Over half of people surveyed felt like their family’s expenses weren’t split fairly.  Separate expenses creates a mindset of “what’s mine is mine” instead of fully appreciating and accepting the maxim of “what’s mine is yours”.  When your money is fully merged, you are each paying for your share of the cable bill because the payment is coming from one pool.

When things are separate, you spend precious energy trying to determine if each person’s contribution is fair.  Either you are depositing amounts into a joint account for bills, which is tedious, or trying to pick bills each of you pays, which can breed resentment.    You agreed 3 years ago that you would pay the cable and electric bill, and they would pay for homeowner’s insurance.  But homeowner’s went up this year and now you’re bickering about whether the split is still fair.  A real waste of time.  Which leads me to…

You are only going to spend so much time talking about money. Make it count.

I noted above that over 50% of millennial couples argue about money on a weekly basis or more but that few couples have regular discussions about money. How often do you fight about money and then set a time to sit down and talk about it rationally?  How often do you just try to get over it and move on?  Unfortunately, probably mostly the latter.

If your finances are separate, you may spend 5-10 minutes a week (or more) splitting expenses or discussing necessary deposits into joint accounts.  Plus, if you are the average couple that fights about money weekly that probably costs you 5-10 minutes of active argument or silent brooding.  Lets target the low end and say you waste 10 minutes a week talking about money in an unproductive way.

By combining your finances and being open about money with your spouse, you free up time to have real discussions about money.  10 minutes a week, set aside on a regular basis when you can both focus on each other, could change your financial life.  Starting from a point of “what’s mine is yours” puts you on the same plane and ready to work together.

Once you are working together, you may not even need a whole 10 minutes a week.  Make it a monthly sit down and spend those extra 10 minutes as a family or snuggled on the couch.  From fighting, to talking, to peace.  All from getting on the same team.

Kids only make things more complicated.  Learn how to budget together when they’re young.

It might be easy to keep your money separate when there are only two of you and joint expenses are predictable and regular.  But kids make things more complicated.  They grow out of their clothes at alarming rates, they need fees for soccer and field trips, they lose their backpacks.  Do you really want to be fighting about who owes who money for your daughter’s Frozen lunchbox? Who has the time?

Research shows that couples fight more about money as they get older.  This makes perfect sense as our finances get more complicated with age and we have less time.  We are raising kids, trying to stay out of debt, and preparing for retirement.  All while driving to piano lessons and Gymboree.  But something else has changed.  Someone is watching, and learning, from you.

Combining finances early on in marriage doesn’t just save you time.  It allows you to practice having an open and honest money relationship before you are expected to teach someone else how to do it.  You learn what you need to talk about and where your differences lie.  Hopefully, by the time your little sponges are picking things up, they see you treating money as a family matter, not a cold war.

You still get to keep your independence.

Mamas, I get it. We have worked our butts off to climb the corporate ladder.  More women are breadwinners today than ever before and I happily count myself among them.  But combining your finances with your spouse doesn’t give up your independence.  You don’t become any less a fearsome #girlboss.  You just set your spending money differently.

When you build your joint budget, put in monthly spending money for each spouse.  Make it equal or adjust for personal needs.  Whatever you decide, make sure both of you think its fair.  Be sure one of you isn’t just avoiding an argument.  For instance, my spending budget has $60 more than Daddy Fish’s because I need to get my hair cut once a month but cut his at home.  Once you decide, agree that your spending money is yours.  Does your husband want to nag you about the third box of quilting fabric that arrived in the mail?  Remind him it is your money.  And try to grant him the same courtesy when he brings home get another “rare” comic book or chooses to take his money to the casino with friends.

It Is All About Openness

At the end of the day, the best way to avoid arguments about money is to have regular conversations about it.  Know your spouse’s money personality, their financial goals, and their money strengths and weaknesses.  Understand that mistakes happen and try to approach both your own mistakes and your partner’s with grace.  In my opinion, the best start to a happy money marriage for the vast majority of families is fully merged finances.  You open your books to your partner, spend less time disputing regular expenses, and become a real financial team.

Do you and your spouse merge your finances?  Why or why not?  Let me know!

19 thoughts on “Marry Your Money: An Argument for Fully Merged Finances”