We are back with another installment of the Aha! Moment debt series! This month we meet Jackie Beck, creator of an incredible debt calculator app and an empty nester who paid off $147,000 in debt to become COMPLETELY debt-free. Jackie is amazing and her honesty and experience here are super valuable. I’m so glad she stopped by!

Check out Jackie’s story and start making progress towards your own debt-free life!

I’m Jackie, and I’m an entrepreneur who focuses on personal finance. (As in, helping people get out of debt without putting their lives on hold, which is why I love this series so much!)

I’m an empty nester who lives in Arizona with my husband and our Pittie/Australian Shepherd mix dog. (My son lives nearby, thankfully!) My favorite things to do include travel, DIY, and eating out. I’m also learning mixed martial arts in my spare time.

Today we have zero debt — zero! Thinking about it makes me just as thrilled now as the day we paid the last bit of our mortgage off back in 2012.

That amount included credit cards, a car loan, my student loan, and our house. (It didn’t include a $210,000 interest-only mortgage I’d taken out on a rental property. I sold that almost immediately after buying it. Really glad I woke up in time with that.)

My aha moment was a very long time ago — long before I ever even made any progress at all with getting out of debt.

Way back when I was pregnant with my son, I was sitting in the kitchen looking at the credit card statement. We owed so much, even though the card was supposed to be for “emergencies only”. I’d tried really hard to pay extra to it, and it had barely even gone down due to all the interest. I was so frustrated. I just sat and cried.

I knew things had to change, but I had no idea what changes to make. Sadly, it was years before I figured it out.

Why? Because an aha moment is one thing; a life event that spurs you to take action no matter what is another.

I actually made the biggest lifestyle changes BEFORE paying down debt.

For one thing, I got divorced from my ex and became a single mom. It lit a fire under me to know that I was the only person in charge of my financial life. No one else was going to do it for me.

I also saw the writing on the wall with my employment situation, so got a second full-time job and built an emergency fund as quickly as I could.

I lost my first job a few months after that, then the second job went goodbye too a few months later. I couldn’t find another job, not even at minimum wage. (As you might imagine, this was during the Great Recession.) The photography business I tried to start failed, and I ended up being unemployed for about 4 years.

During that time, I remarried.

Finally, I got a job. It was part-time, but I felt rich in comparison. I was finally bringing in money again!  I’d lived on so little for so long that I decided to just keep on doing so and pay off my student loan. (I did rebuild a small emergency fund first.) 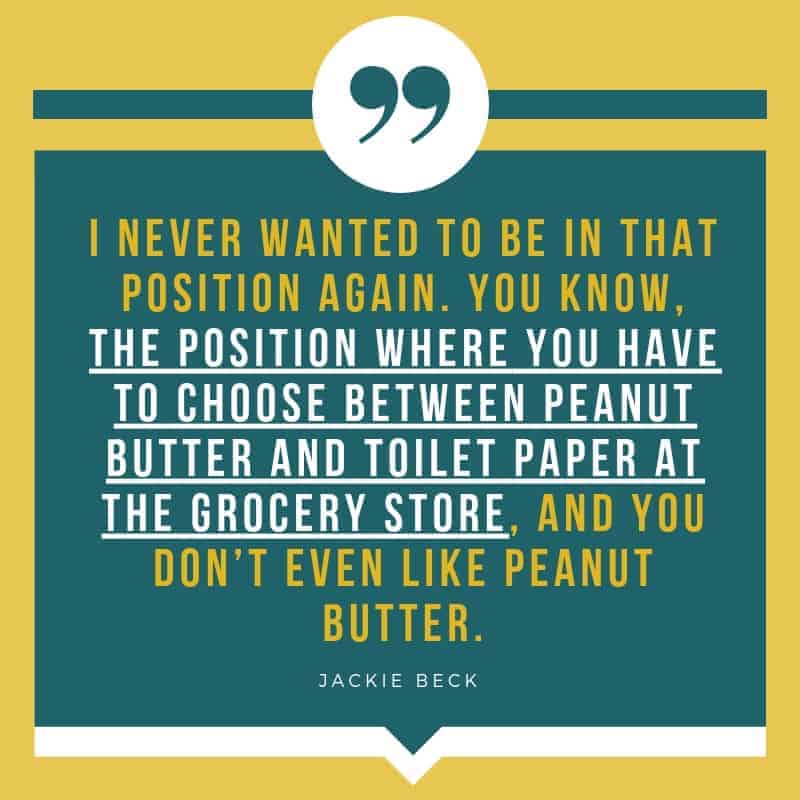 The main thing was, I NEVER wanted to be in that position again. You know, the position where you have to choose between peanut butter and toilet paper at the grocery store, and you don’t even like peanut butter. Where you have debt hanging over your head that you can’t repay. Where you’re in deep trouble if you lose your job.

That’s when the debt reduction stuff started to work.

Of course, having a spouse who ALSO really wanted to be debt free made a huge difference. (My husband and I keep separate finances, but we are definitely on the same page about money and debt.)

He’d been paying down his credit cards and building an emergency fund. When he saw how excited I was about getting my student loan paid off, he decided to pay off his car too. Things snowballed from there.

Not at first, but that part-time job eventually turned into full time. Then I started a successful iPhone app business while continuing to work full time. (My app is called Pay Off Debt by Jackie Beck.)

Once we decided to pay off the house as well, my husband did odd jobs too to bring in extra income. We both got better jobs, and raises. We stayed focused on the prize.

I feel like we just had life. My husband lost his job at one point, there were surgeries, ongoing large vet bills, appliance breakdowns, I blew the engine on my car, you name it. But that kind of stuff — or things like it — happens to everyone.

The trick is to expect the unexpected and prepare as best you can ahead of time. Then if you realize you didn’t do enough, do what you wish you’d done the first time in case it happens again.

My husband wanted to go a little slower and buy some expensive things first before tackling the mortgage.  We talked about it and decided on a pace that worked for both of us. So he did that, and I waited.

Plus, we weren’t even sure how we were going to pay off the house. We had no idea, so we started small with $35 extra a month, and went from there. I love to travel, so we did that too. We ate out and lived life. Throughout it, we kept to our rule of only spending money we already had.  We could buy or do anything we wanted, as long as we saved up the money first.

When we got close to being done with the mortgage (down to about $50K), we kinda went hog wild with it. It was super motivating to be that close, so we dumped as much money as we could to it. (If you want to know more paying off the house, check out the details of how we paid off our mortgage early.)

We inadvertently used the debt snowball, before I’d heard of it. By the time I learned about it and created the app, we were down to just the mortgage.

I recommend it though because it’s VERY motivating to see progress. When you see progress, you keep going.

The avalanche is much more about math (and people often feel like interest is the problem) but the thing is, you need a lot of patience and to be highly motivated despite a seeming lack of progress to use that. Most people are not. That’s why we have/had debt.

Lots of times, the avalanche actually makes very little difference interest- or time-wise anyway. (You can easily run your exact numbers both ways in my debt calculator app.)

The biggest mistakes were with budgeting. I used to write out a budget, and then chalk it up to it just being an unusual month when I overspent. It took me a long time to realize that EVERY month is an unusual month.

Eventually, I learned that if something unexpected happens once, it or something similar can happen again. So put it in the budget and plan for it.

After we paid off the house, we saved up for two things we’d always dreamed of. I went on a trip to Antarctica, and my husband bought a sports car. (Saving up for things is a whole lot easier to do without debt!)

Now, we’re focused on building up passive income so we can continue to have more options and less stress.  My husband is contributing huge chunks of his salary to retirement, and I’m saving up for another rental property.

Readers can learn more about my story at JackieBeck.com, and can read the details of how we paid off over $147,000 in debt right here.  I’m happy to answer questions and provide encouragement too. Thanks for letting me share our story!

Thanks to Jackie for sharing her debt-free story!

What did you think of Jackie’s story? Any thoughts you would add?

You can get the password to all the documents in my Freebie Library, including printable trackers for your debt payoff journey, at the bottom of all of my weekly newsletters! If you aren’t on my mailing list yet, visit the library to get signed up and see what tools are available. 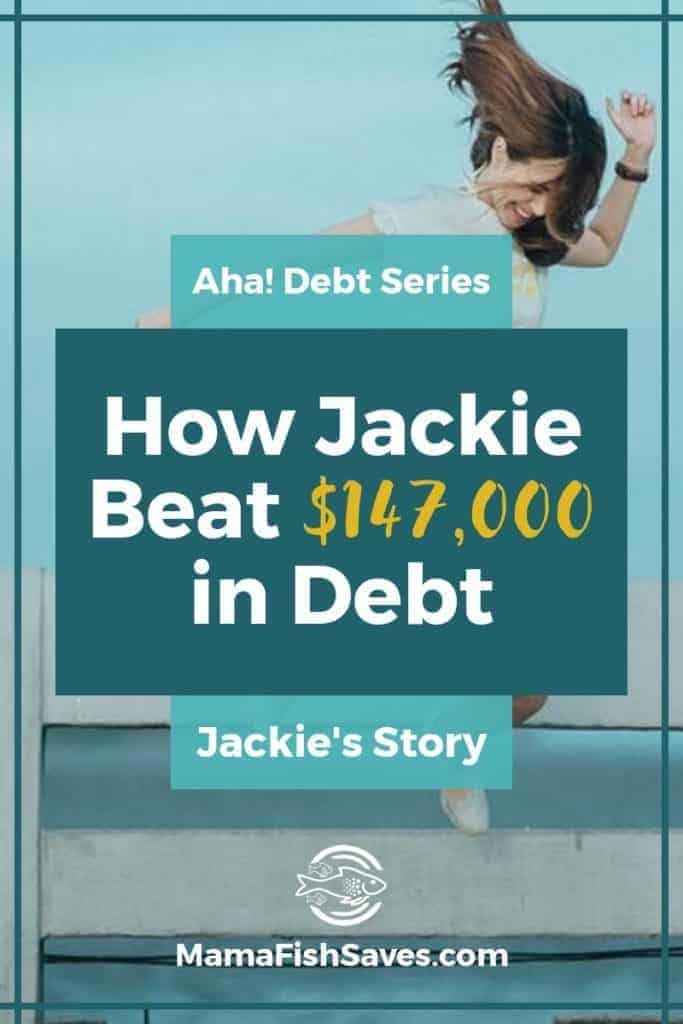