With the U.S. stock market continuing to hit new highs, I have been asked by some readers if they should wait to invest in the stock market. Interest rates are rising, we are over eight years into a bull market, and some pundits are starting to call for the next downturn. People are worried about investing at the peak of the market, so they are holding off. But they really shouldn’t be. In today’s post, I’m going to break down why you should still be investing in peak markets.

Timing the market is just as hard as picking stocks, but that is exactly you’re doing if you are holding onto cash and waiting for a market downturn. You’re betting that the pullback will more than compensate you for the lack of return while your money sits in cash. You’re also betting that you’ll have the discipline to put the money in when everyone else is taking it out. So, what is the problem with making that bet?

You could be wrong

In every market, it isn’t hard to find a Chicken Little. Someone running around telling you that the sky is falling, the market is going to crash, and you need to get out now! Eventually, one of them will be right. But none of them know when that is.

On August 26, 2014, the S&P 500 closed above 2,000 for the first time. At the time, plenty of people were there to say that valuations were too high, the underlying economy wasn’t strong enough, and we would see a downturn in the near term. Some claimed that even if the economy improved, stocks would have to drop by about half to see normal rates of return in the next cycle (source).  But if you had listened to the naysayers and pulled your money out of the market in August of 2014, you would have missed out on 7.8% annual returns (9.8% if you reinvested dividends) between then and now.

Then, in February 2016, when the bond markets were under significant pressure, many people thought we were seeing the beginning of the next market downturn. If you had listened to the naysayers and pulled your money out of the market in March, you would have missed out on a 17.8% return (19.7% if you reinvested dividends) over the following year.

If you hold onto your cash long enough, eventually you’ll see the market decline. That’s how cycles work. But just because you were eventually right, doesn’t mean you didn’t miss out on a lot of growth in the waiting. Which brings me to my next point: time is money.

I have written about dollar cost averaging and why I love it as an investment style. Investing on a regular basis, without concern for price, is a great way to create discipline in your investment methodology and get your money to work in the market quickly. Every day your money sits in cash, you are losing value. Your checking or savings account doesn’t compensate you for inflation, so the $100 in your checking account today is worth less next year.

If I had $100 to invest a month, I would invest it every month instead of waiting until I had $1,200 at the end of the year. However, if someone handed me $1,200 today, I would invest it all now instead of bleeding it in over 12 months, even though traditional DCA would recommend bleeding it in. And, according to Vanguard, the majority of the time I would see better performance.

Vanguard looked at rolling 10-year periods in the US stock market from 1926-2011 and backtested the performance of lump sum investing versus DCA. In other words, would you do better investing a certain sum of money today or bleeding it in over 12 months? What they found was that regardless of asset allocation, 65%-67% of the time you would see stronger returns putting the money in the market today than trying to smooth things out by leaking it in over time.

The reason for this is that the long-term trajectory of the market is up. The more time your money is in the market, the better you do.

So, what about the 35% of the time where it is worse? What if you are the unluckiest person in the world and this really is the market peak?

Investing is a long-term game and in most cases, time heals all wounds. The secret is to hold strong through market cycles and not take your money out of the market as things get bad. However, it is incredibly hard to keep running forward when the herd is scrambling out. So, to provide some motivation for you to invest and hold strong, I took a look at the last ten market cycles. How would you have done if you invested your money on the peak day before the market turned?

On October 9, 2007, the S&P closed at 1565.15. This would be the peak day before the worst recession the U.S. economy has seen since the Great Depression. For my illustration, I assumed you invested $10,000 on that exact day. Every year, for the next year and a half, you watch your hard-earned investment go down. Most people would take this as a sign to sell. But this is what would happen if you didn’t. 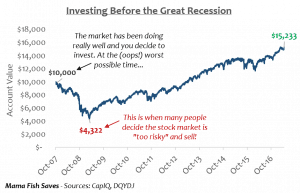 In March of 2009, your $10,000 would have fallen to $4,322 in value. A greater than 50% drop would be a pretty big gut punch. But by holding steady and recognizing that the market naturally rises over time, you would have recouped your whole investment by August 2013. By now, you would be up over $5,000. Your average annual return would be 4.7% with a total return of 54.7%. Not the 7% long-term average, but well above the 0% of your checking account and the 1%-2% annual inflation rate. And this is forgetting one very important thing. Dividends. 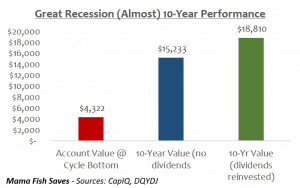 Many stocks in the S&P 500 pay dividends, so either you would have been receiving some cash payout on your $10,000 investment along the way, or you could have chosen to reinvest the dividends over time. (Reinvestment is exactly what it sounds like. Instead of getting a quarterly dividend check, your fund provider would just deposit that money right back into your investment account.) Had you chosen reinvestment, your account value would be $18,810 today for a 6.5% annual return! Almost in line with the long-term average of 7%!

For the Great Recession, it seems like you would have done quite well, even if you invested on the worst possible day before the downturn.  What I wanted to know, was does it hold true in other cycles as well? This 10-year time span between cycles isn’t typical.  Usually, a cycle happens every six to nine years, so if you invested right before a downturn you could potentially see two declines over your investment period.

To find out the answer for our unlucky investor, I looked at investment returns during the 10 recessions prior to the Great Recession. The National Bureau of Economic Research tracks market recessions and contractions since the mid-1800s and the Bureau of Economic Analysis measures recessionary periods based on gross domestic product (GDP). Here’s what I found. 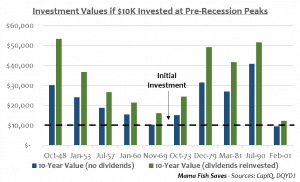 In only 1 out of the past 10 recessions, starting in 1948, would you have seen your $10,000 investment lose money over a 10-year period, and only then if you had chosen not to reinvest the dividends.  On average for all recessions, including the Great Recession, if you managed to invest your $10,000 at the exact peak before a downturn and left it invested for 10 years you would see an average annual return of 7.1% without dividends and 11.6% if you had dividends reinvested.

This means, on average, even if you had the worst recession market timing possible, your $10,000 would more than double to $21,659 over a 10-year period. If you chose to automatically reinvest your dividends, your $10,000 would more than triple to $32,906!  You would have to fight through seeing your account balance fall through one, and sometimes two, recessions.  But if you did, your money would be worth a whole lot more than if you had just buried it in your backyard.

Millennials came of age during the Great Recession. We heard how our parents saw their 401K and retirement savings decimated. We faced tough job markets at graduation. So today, many of us have an intense distrust of Wall Street and the stock market. But too many of us have let the memory of the bad keep us from seeing the truth of the good.

We have the opportunity to learn from a severe cycle that happened early in our lives. Our parents’ retirement savings were only decimated if they panicked. If they let that fear settle in and took their money out of the market in the darkest days of 2008-2009, they never had a chance to benefit from the strong market recovery over the past eight years.

Investing in a peak market, when you know what the troughs look like, isn’t easy. But if you can have the discipline to invest for the long-term, the sooner you get your money invested in the market, the more wealth you’ll have in the future.  Your money works for you, don’t let it sit idle!

What is your investment strategy in a peak market? How do you use downturns to your advantage? Let me know!

This article is not intended as personal investment advice, but as my opinion of why I invest through the cycle. Past market performance does not guarantee future performance. For more information, please see my disclosure. 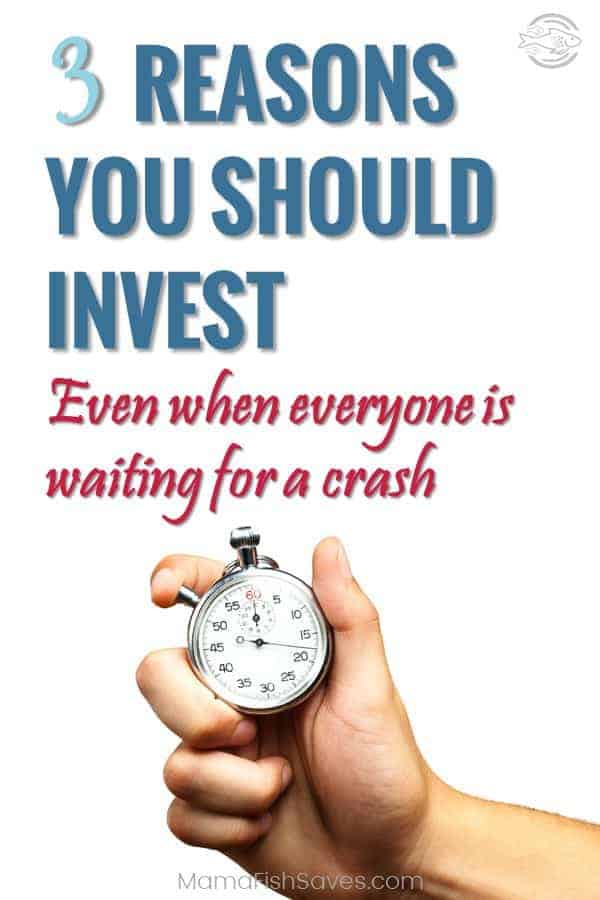 49 thoughts on “Why You Should Invest, Even in Peak Markets”