When I was a child, I fell in love with mathematics because of its clarity. There was one right answer. And no matter your gender, where you came from, what you looked like, or the language you spoke – that answer was the same. Numbers were numbers.

Once upon a time, I felt the same way about money. That no matter what you were born, your financial success or failure rested on your shoulders alone. But while money in itself knows no gender, race or creed, I’ve learned the societal constructs that surround money certainly do. The road to prosperity and wealth don’t look the same to everyone.

As a woman, I face structural roadblocks that men do not. Yet, as a white, cisgender, hetero woman, raised in an upper-middle-class home with two parents, my life has still been steeped in privilege.

Many financial books ignore or gloss over the idea of privilege. It is easy to do when you haven’t been faced with the struggles. Personally, I’m still working on being more aware of my words and actions. But when I’ve read financial books aimed at women, they seem to fall in a few camps. They tell women to hide their tears and act more like men to succeed (without acknowledging that there are financial consequences to that as well), they’re shockingly condescending, or they are a rallying point to tear down patriarchal systems without solid advice or operating in the now.

My friend Brynne Conroy, founder of Femme Frugality, wrote her first book, tackling money advice from an intersectional feminist perspective. It went live everywhere books are sold yesterday. And it’s awesome. The Feminist Financial Handbook: A Modern Women’s Guide to a Wealthy Life provides actionable advice and knowledge from women of all walks of life, even if you’re struggling today. 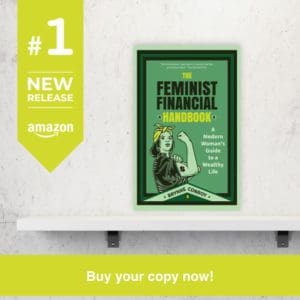 If you’re a woman who has never felt like a personal finance book was talking to you, or if you’re feeling weighed down by society or life’s difficulties, Brynne’s book is your chance to get advice from a perspective you know well. I want to be clear, though, that any woman can gain knowledge from this book, even if you’re feeling like a financial rockstar and just want to learn how to acknowledge where you’ve benefitted and better support other women.

Brynne’s book covers important topics like wage negotiation, why more women are becoming entrepreneurs, the “elephant in the womb”, the costs of divorce, finding ways out of poverty, and so much more. All while giving crucial consideration to heteronormativity, ableism, racism, and other types of discrimination that make building wealth harder for some women than others.

With women the primary breadwinner in 40% of U.S. families, owning over 30% of small businesses, and – I don’t know – representing half the country’s population, it’s time for the wage and wealth gaps to close. And that requires acknowledging the gaps, educating ourselves to navigate the financial systems, pushing for changes, and taking steps to create financial stability and success for all women. Just like The Feminist Financial Handbook can help you do.

If I haven’t made my point yet, I think you should run out (or hurriedly click over to Amazon), and buy this book. It’s an important topic and one that Brynne handles with incredible grace, weaving in stories from real women, outlining smart policies that could improve the gender gaps, and providing steps you can take today to improve your financial life.

While you head to Amazon, you’ll have to excuse me. I’m off to tape a poster of Brynne’s badass woman-of-color ‘Rosie the Riveter’ to my wall like a 90s teenager.

P.S. If you’re a woman who wants a safe place to talk and learn about money, join us in the Smart Money Mamas Facebook group.

1 thought on “The Feminist Financial Handbook: A Must Read New Book”