We are back with another installment of the Aha! Moment debt series! This month we meet Cody, a young father who has worked with his wife to pay off $83,000 in debt in just 20 months.

But I have to tell you something important.

Cody and his wife have a combined income below six-figures.

They work hard and they prioritize their spending, which has put them in a place to achieve financial independence in 5 years when Cody is just 30-years-old.

Debt freedom and financial independence are for everyone! Check out Cody’s story and start making progress towards your own debt-free life!

My name is Cody and I’m a 25-year-old financial independence aspirate living in Eastern Washington with my wife, Georgi, daughter, Elli, and fluffy lapdog, Pilot.

In addition to my day job, I’m an author, blogger and financial coach for individuals and businesses and a big football fan (go Hawks!)

Five years ago though, my wife and I were recent college graduates working minimum-wage jobs in Seattle and had over $83,000 in student loan and car debt.

Just 20 months later, after drastically reducing our expenses and increasing our income, we paid off all our debt.

We wanted to start a family but needed more of a financial cushion before pulling the trigger.

The first thing we decided was to pay off our car. We started researching the best ways to do this and stumbled across the early retirement blog of Mr. Money Mustache. After devouring his content, we fully revamped our spending habits to go above and beyond our goal of just paying off the car.

We decided we would pay off all our debt and pursue financial independence, so neither of us would have to work to provide for our family.

We started with the lowest-hanging fruit. We canceled our Verizon contracts, paid the early termination fee and switched to Republic Wireless, reducing our phone bill from $120/month to $25/month.

We cut the cord and saved $80/month by eliminating cable.

We temporarily suspended gift-giving (except for some small gifts during Christmas) after explaining to our families what we were trying to do.

We stopped eating out and leveraged Costco to cut our grocery bill (including toiletries) to $75/week for the two of us.

Most of our recurring subscriptions were canceled, except Netflix, and we moved into a cheaper apartment.

We started walking to work and didn’t take any vacations. 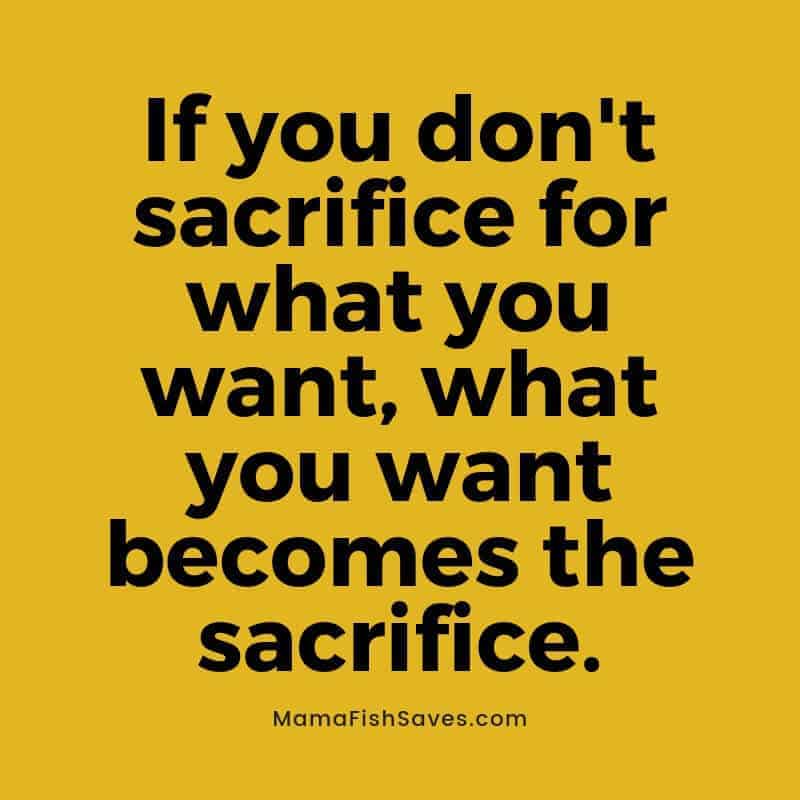 After getting our car loan’s balance down to its actual market value, we sold it and bought a $2,400 Altima to eliminate our car payment. We significantly reduced our car insurance premiums by switching to liability-only on the cheaper Altima.

We bought “two-buck Chuck” (now almost-three-buck-Chuck) instead of craft beer.

All of these changes allowed us to put the majority of our paychecks towards debt. We also made a major lifestyle change by moving from Seattle to a small city in Eastern Washington about halfway through this journey, both because I had family there and the cost of living was lower.

I still wanted to keep the job I had in Seattle, though. My employer had never had a full-time operations employee work from home, so I knew my request would be unprecedented. That didn’t stop me from asking, though.

I got creative and put together a detailed work-from-home plan for my managers that would have me working in three different departments. My presentation convinced them to take the risk on me, and I paved the way for others at the company to do the same!

I’ve been working from my home office for over three years now.

Yes, my wife’s blog was found by a publication that hired her as a freelancer. She wrote a couple articles a month that brought in a little bit.

We also found higher paying jobs a few months into our debt payoff spree that paid us roughly $15/hour.

A year later, I got a raise that brought me up to $24/hour and a new position that allowed me to take extra on-call shifts. During this time, I was taking on two on-call shifts every month, allowing us to increase our debt payments even more.

Within a week of deciding to pay off our debt, my wife was laid off.

She found another job a month later, but it paid slightly less than her previous position. This slowed down our payoff timeline but acted as even greater motivation to get ourselves out of this hole we had dug.

I am very blessed with a spouse that is completely on board with the frugality and FIRE concept, which goes hand in hand with being debt-free.

She was pushing us to be more frugal even before I went looking for ways to pay off our car loan faster.

In fact, I’d consider her even more frugal than me; I’m a sucker for eating out and she has way more willpower than I do. She makes eating at home really enjoyable, though, because she’s an excellent cook and baker.

We used the snowball method.

Even though we paid a little bit more in interest over the avalanche, the psychological boost from seeing the smaller line items fall away one by one was worth it.

Looking back, I think we didn’t have enough balance during this time – balance between present and future happiness.

We slid a bit too far into deprivation.

In retrospect, paying a few hundred more dollars to visit family more often and allowing for a few extra dates would have been worth delaying debt payoff by a couple weeks.

Also, all of those on-call shifts added up. I was sleep deprived and it often affected my attitude. There were a few times where I took on three consecutive weeks of on call and that was definitely a mistake.

It’s important to be aggressive with debt payoff, but being too aggressive can lead to burnout and frustration.

Our next goal is financial independence!

We’ve grown our net worth into the six figures (not including home equity) and are roughly 5 years away from financial independence.

My wife is now a stay-at-home-mom, but she submits articles about once a week for the same publication. I still work for the same company, but my salary has increased and I focus on providing as much value to my employer as possible, which in turn results in solid raises.

We don’t make 6 figures in combined household income, but we keep our expenses low, allowing us to save 65-70% of our take-home pay.

We also took all our combined knowledge of years of experience and research in personal budgeting and financial planning and wrote a book (Clocking Out Early: The Ultimate Guide to Early Retirement) and started a blog, which we hope will bring in some passive income in the future.

Check out our book and blog, Clocking Out Early!

On the blog, we’re a few posts into our FIRE series, which covers everything from expense reduction and debt payoff, to investing, travel hacking, calculating how much you need to reach financial independence, tax optimization strategies and sustaining financial independence during the drawdown stage. This series will likely be at least 30 posts that will be released over the next 1-2 years. The same information can also be found in our book if you’d like to check it out before the series is complete!

Thanks to Cody for sharing his debt-free story!

What did you think of Cody’s story? Any thoughts you would add? 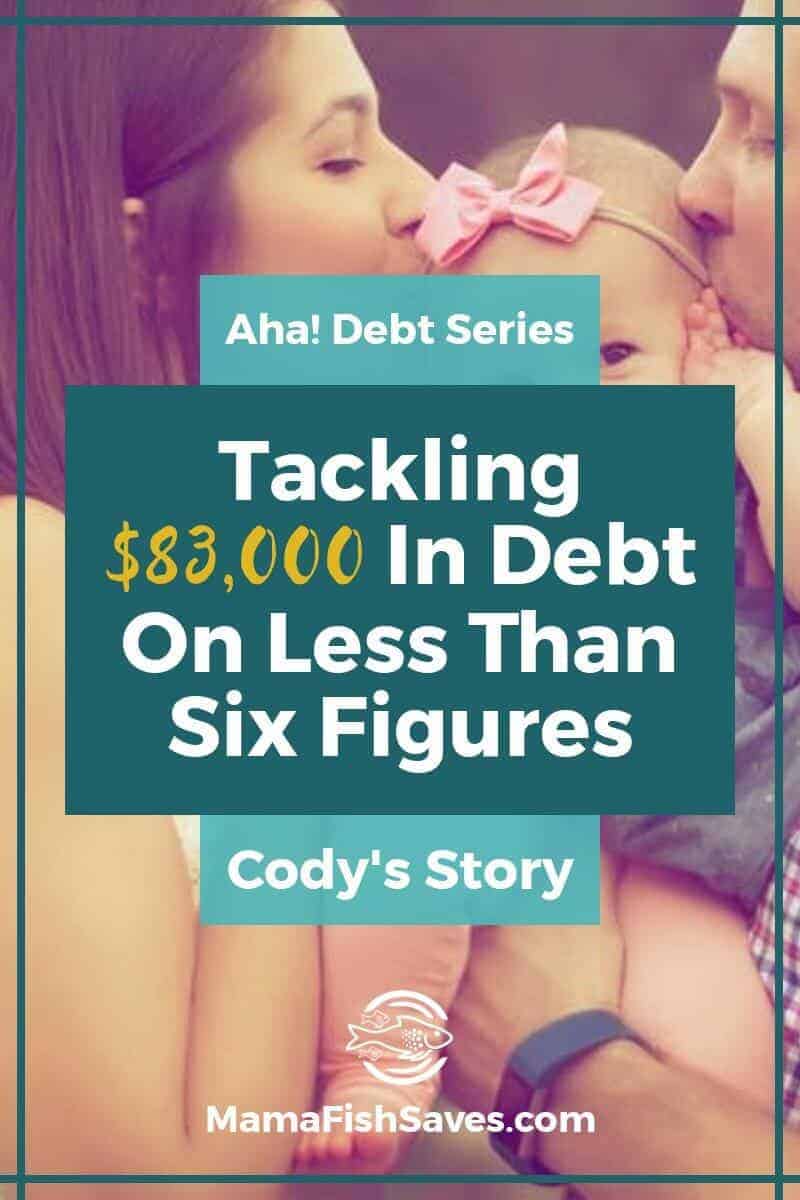