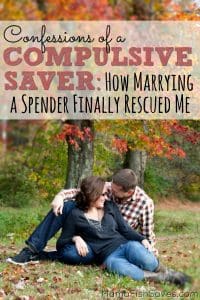 I was born a saver. My parents weren’t savers, we never had an allowance system that lasted more than a month, and I don’t remember anyone having to tell me to save money.  Yet, save money I did.  Every penny I got went into the bank or into a box in my closet to be protected at all costs.

This trait has served me well in many ways. But it has also caused me pain.  For a very long time, spending money meant physical stress. Crying before entering a store for a discretionary (and sometimes non-discretionary) purchase, shaky hands at the register, and endless guilt post purchase.  I can’t tell you how many things I’ve saved for over the years and never bought.  Or how many things I bought and never enjoyed because of the guilt.  One of many examples was buying furniture for my first apartment after college.  I budgeted for the expense from my earnings during the year and went to Ikea with my mom.  I came in 30% under budget and cried in the car.

It wasn’t until a few years ago, when I met and married the perfect spender, that things actually started to get better.  You still won’t see me spend $10 when I could spend $3, but at least I will actually spend the $3.  And, most of the time, you won’t find me stressing about it afterward.

The Spender & The Saver: A Love Story 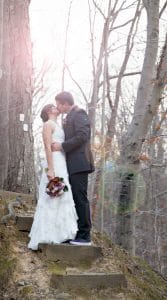 was a friend of his sister’s.  Yes, I realize how sketchy this sounds.  But I was lonely and spending too much money on rent living alone.  I thought this apartment would let me save some money (of course) and make longer term plans.

What I didn’t know, was that six months later I would start dating my Craigslist roommate.  And that about a year after that, you would find me standing by a lake on a crisp November day, marrying him.

What’s Mine is Yours

Shortly before getting married, we combined all our financial accounts. It was decided that I would be in charge of updating and maintaining our budget.  I had the most financial experience and certainly the most interest in the process. We would discuss where we stood on a regular basis and discuss any sizeable expenses beforehand.

While my husband and I have a lot in common, our financial habits are very different.  Daddy Fish is a spender.  Not a “blow all his money on useless doodads and expensive cars” spender, because he is also a cautious person, but an “if I have it I want to enjoy it” kind of spender.  I mean, the man used to own a boat for goodness sake! And not the kind you power yourself!

However, by turning the budgeting over to me, he very quickly saw how my saver compulsion was hurting me.  I wanted a small wedding because it would be less expensive.  I bought my wedding dress at a consignment shop.  We went to Mexico for our honeymoon when we could have afforded our bucket list trip to Australia because I couldn’t pull the trigger.  I was missing out on life just to keep dollars in the bank.

The worst part was, I was now stressing him out!  My propensity to create too much false scarcity made him think money was much tighter than it actually was.  He started to worry that we spent too much and that we were setting ourselves back! He didn’t realize our spending and vacation budgets were so small because I had dropped even more into savings, even though we were already saving more than 30% of our income.

For me to relax and enjoy life, and for him to be happy, we needed another way.

The No Wallet Rule: Divide & Conquer

For those of you who don’t know, Daddy Fish is a rockstar stay-at-home dad.  But even when he worked outside the home, we were in vastly different industries that meant I made a lot more money than he did.  What solved our money issues originally started as a joke.  When we were out and Daddy Fish would pay for things he would say “you make it, I’ll spend it!”  It was tongue in cheek until we realized it worked!

Today, if you meet us together at a restaurant, in the mall, or at the grocery store, I can almost guarantee I won’t have a wallet.  It may be in the car, or I may have left it at home, but it almost certainly won’t be in my pocket.  He pays. I’m along for the ride.

If the house needs a new deck, he writes the check. When we bought our house, he signed the papers. When we have a babysitter, guess who hands over the cash?  This isn’t some old school, “the man should always pay” rule.  All our money is combined.  It is a rule born from experience.

It only took a few times to notice that when I didn’t have to physically pull the trigger, I could relax.  I didn’t have to stare at the number on the screen and let it ruin my whole day. When I balanced the budget at the end of the week, I had already felt the real enjoyment from the expense, or come to terms with its necessity, and it didn’t bother me quite as much.  I could see that the budget wasn’t, in fact, broken.  For the first time, I could breathe.

Why it Works for Us

I understand that for most families, this plan would be a recipe for disaster.  One spouse would end up feeling resentful of the other, or the spender would spend way more than the budget allows and only reinforce the saver’s anxiety.  But when we step back and think about it more critically, it is easy to see why the No Wallet Rule works for us.

At our core, my husband and I are both security seekers. We think about the future a lot and love the feeling of having a plan and a goal.  Our ability to discuss plans on a regular basis, be on the same page, and pivot together when we need to means we are running in the same direction.  He’s the ying to my yang. And I couldn’t be luckier.

How have you struggled with money in your life? How do you and your spouse split financial duties?  Let us know!

13 thoughts on “Confessions of a Compulsive Saver: How Marrying a Spender Rescued Me”